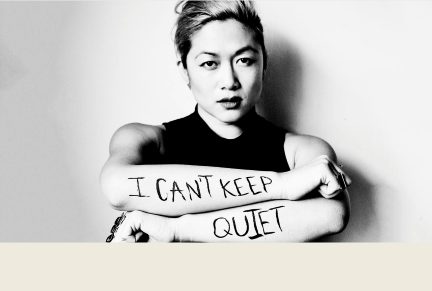 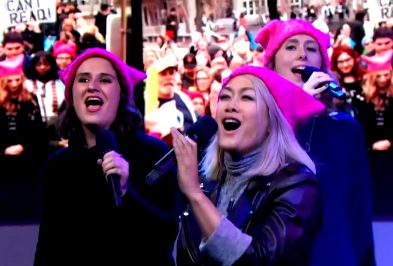 But no one knows me no one ever will
if I don’t say something, if I just lie still
Would I be that monster, scare them all away
If I let the-em hear what I have to say

Two years ago, this song was sung at the first Women’s March in Washington, D.C.  Los Angeles based singer, Connie Lim, who goes by the name “MiLCK”, sang the song with a chorus of women at the march, and it went viral.  It not only became the unofficial “anthem” of the Women’s March, but women and girls around the world began singing it as a proclamation of their worth.

Somehow, I missed the story of this song when it first arose, until this week when I heard it on the radio. Since then, I’ve listened to many groups singing it: a group of women living in Ghana, where they have very few human rights; intergenerational groups in New York and Stockholm and a young punk group in Norway; a choir of 1300 women and men in a drop in community choir in Canada called “Choir!”.  The simple words of this song empowered people from many backgrounds, especially those who experienced abuse, oppression and marginalization, connecting them in their urgent need to raise their voices and speak their pain.

The song resonates back thousands of years even to the people of Israel as they proclaimed their song of victory and inclusion:  “For Zion’s sake I will not keep silent!”  How deeply that message resounds with us:  how many of us have been told to quiet down, to keep our thoughts to ourselves, not to share too much, or to share at all?  What voices have not been heard in our country, our community, and even in our church?

The miracle in today’s Gospel story — a miracle only told in John’s Gospel — came about because one woman, Mary, the mother of our Lord, raised her voice.  Mary spoke up to her son, and gave words not only to the hospitality needs at the wedding — “they have no wine!” — but also to the need of the people to have hope, to see the glory of the Christ, so that everyone might feel empowered to act, and to speak, to shine themselves.

In John’s Gospel, Mary’s name is not spoken; she is only called “the mother of Jesus”.  Even Jesus refers to her only as “Woman”.  Sounds a little sassy to me! At the same time, then, Mary becomes all women, with the courage to speak up and to be heard; to speak the truths that are sometimes difficult to admit, to acknowledge what the servants already know, but that those in power often ignore.  And still, she persisted.

Naming, as we discussed at last Sunday’s baptism, was an important symbol for the ancient Israelites.  Part of the vindication of the Hebrew people was being “called by a new name”.  Instead of “forsaken” or “desolate”, they would now be called My Delight is in Her.  They would be called “married”, as a symbol of God’s unconditional love for them.

Connie Lim changed her name to “MilCK” when she became a recording artist.  Connie grew up as a victim of domestic violence and developed an eating disorder.  She began writing songs to heal herself and others.  Connie first wrote the song “Quiet” as a response to a dream she had, and it became a way to “digest her rage”.   When she recruited a group to sing with her at the Women’s March, she realized her calling, her ministry, her service, as Paul writes to the Corinthians, was to bring people together and unite them through singing.  When we raise our voices together, we are connected in one breath, one energy, one Spirit.  Paul  understood that as he wrote to the early Jesus movement in Corinth.

The church in Corinth at that time experienced deep divisions, and different group considered themselves separated by status, with some groups claiming authority over others.  Paul writes to heal these divisions, to remind Christians then and now that we are all One Body, a theme that we will continue to discuss next Sunday at our unified service at 9:30 and our Annual Meeting to follow.  We are stronger together, only when all voices are heard and valued.

When we are told that our voice, that our life doesn’t matter; even th 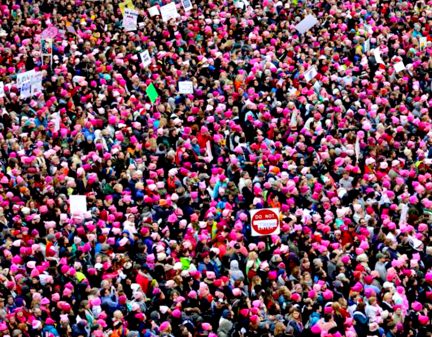 at our story makes us somehow less than, damaged, ugly, then we bury our truth, we bury our grief, and we become unwell.  This dis-ease in an individual also affects the whole system.  By opening up the statute of limitations for those who need to tell their stories of abuse in the Episcopal Church, Bishop Greg and other bishops not only provides a healing release for those whose stories need to be acknowledged, it heals our system from secrecy, of domination, of divisions and disconnection.  When one voice is freed, we can all sing with more strength and clarity.

Cuz no one knows me no one ever will
if I don’t say something, take that dry blue pill
they may see that monster, they may run away
But I have to do this, do it anyway
I can’t keep quiet, no oh oh oh oh oh oh A one woman riot, no oh oh oh oh

And then.  And then we can all truly shine!  As we prayed in today’s collect, “shine with the radiance of Christ’s glory”.  I wonder if in fact that is not the answer to revival in our churches:  to truly celebrate all people, all stories, all voices.  To paraphrase Paul:  There are varieties of experiences, but the same Spirit; varieties of ages, sizes, cultures, genders, orientations but the same Lord; varieties of worship styles, music and Eucharistic prayers, but the same God who activates them all.  And when the Church can admit to silencing some of those experiences, cultures, genders, and when we begin to heal those divisions, then we can truly grow healthy, strong and abundant!

Abundance is another clear message in today’s Gospel story.  The sheer amount of water for purification at this wedding is more than usual.  This ritual would have entailed the washing of hands before the celebration meal; it’s similar to when the Eucharistic minister symbolically washes the priest’s hands before Communion.  Now, I want to make sure that no one gets the idea of switching the water for washing into wine; that joke only works when you use white wine anyway, and it’s not so fun for the priest!

In this start of the New Year, as we prepare tomorrow to honor the birthday of the Rev. Dr. Martin Luther King Jr., someone who gave his life by speaking up for the rights of those who were oppressed — how will you use your voice?  About what are you keeping quiet?  Whose story do you need to hear and acknowledge?  And with whom will you sing?  Sing with me now.           Jesus’ miracle creates an extravagant amount of wine was for the dinner guests.  Jesus’ performed this first of “signs” to point the way toward God’s power, and God’s abundant love and hospitality for all God’s children.  Soon everyone at the wedding, and in the town, and surrounding towns, were singing the praises of this new prophet, who performed miracles that were overflowing and nourishing.  And all because one voice — one Woman — spoke up about the need.

And all of God’s choir sang together AMEN!

Recent
Archive
Other News
This Week at St. James